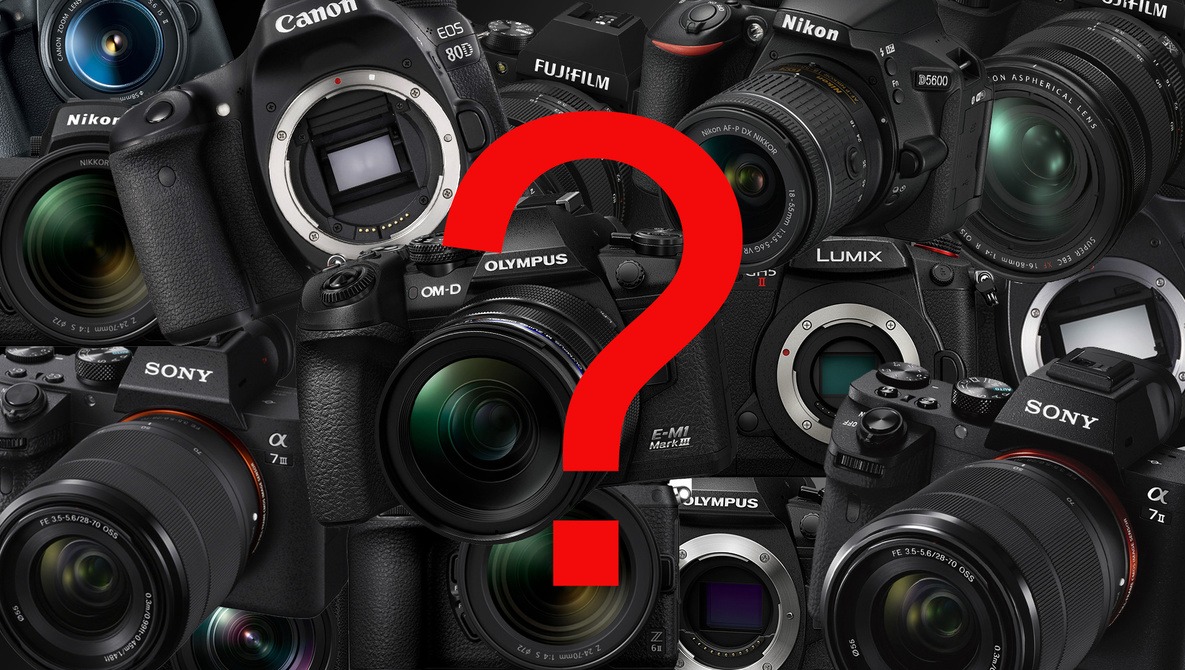 I am regularly being asked which cameras people should buy. My reply is always the same: never ask a photographer that question; we always recommend what we own. How many Sony owners would recommend a Canon or Nikon? Here are seven hints to buying the perfect camera for you.

Here’s Why You Shouldn’t Rely Solely on Reviews

It was a few years ago now, but I remember reading two reviews of the same camera in two magazines. Both magazines, now defunct, were from the same publishing house. One gave the camera a glowing 5-star review, and the other magazine gave it a dull 2-star rating. The manufacturer advertised in the first magazine, and a full-page advert for that camera appeared next to the review. They did not advertise in the other magazine at all. I’ve been suspicious of reviews ever since.

If you look all the online for reviews of cameras today, you will still find hugely differing opinions. Try Googling reviews of the Canon EOS RP model as an example. It is simultaneously the world’s best mirrorless, and has noisier images than most current full-frame cameras. Then, it has mediocre 4K video capabilities and slow burst modes, yet is a versatile and extremely approachable camera, even though it doesn’t dramatically outperform its rivals. Which of those points of view do I believe?

Use reviews for guidance, but don’t rely on them to tell the whole story.

Much Ado About Nothing

The other thing to remember about reviews is that, to make great reading, they often make a huge fuss over what can be tiny differences. Take a look at the entry-level DSLRs from different manufacturers. In functionality, there isn’t a lot to choose between them. In the real world, a beginner will take similar images with all of them, as would an experienced photographer.

Most cameras in any given price bracket are very similar.

Of course, occasionally, there are some that stand out with features unheard of in other brands and models. As far as I know, the ability to watch a long exposure gradually develop on the live view screen (Live Bulb), or take composite photos only adding new light as it appears (Live Composite)—think of shooting lightning, or light painting a subject—are attributes unique to Olympus that are even found on their entry-level OM-D E-M10s. Yet, there are reviews on reputable photography websites that don’t even mention these distinctive features in the specifications, let alone in the review and comparisons to other cameras.

Conversely, when I bought a Sony a7 several years ago, none of the reviews I read mentioned the need to pay for apps that gave the camera the functionality I needed. Those features came as standard with other full frame cameras. I felt hoodwinked.

Look for unique features in camera systems that set them apart from others.

What About Buyers’ Reviews?

Buyers’ reviews are unreliable. As I suggested at the start, people will almost always sing the praises of the camera system they own, despite not being able to compare it with others. Furthermore, they will rarely admit to a purchase decision they made being the wrong one. Consequently, they will write shining reviews to justify the kit they just invested in. Probably rightly so, as all the big brands make great cameras. But people rarely admit that they made a bad choice spending those hundreds of dollars.

A camera owner will almost always think they made the best choice. But what’s best for them isn’t necessarily best for you.

The Dark Side To Customer Reviews

Treat customer reviews with a pinch of salt. It’s well-publicized that the internet is strewn with fake customer reviews. Now, instead of just researching what camera or lens we should buy, we also have to research those who write about them. Which?, the UK’s respected Consumer Association magazine, has 27 articles warning about fake reviews.

You can be sure that businesses big and small will lurk behind fake personas on websites and talk up their brand, talk down the competition, and try to discredit any article that criticizes their products. I know someone who was employed by a company to do just that; they signed a non-disclosure agreement, so they cannot officially talk about it now they have moved on. But this is a huge scandal waiting to be exposed. A colleague recently observed a new account that was set up here with the sole purpose of praising a particular retailer.

Both positive and negative posts and comments can be outsourced. You can buy for $8 a social media post, or pay $100 per 10 comments on an article or post. Furthermore, goods bought on Amazon arrive with labels offering free products for those who write 5-Star reviews of their goods. Even reviews on Trustpilot are easy to fake.

You can spot these kinds of dirty tricks going on in online forums. For example, in Facebook groups dedicated to single camera systems, there are individuals who always make negative comments about the brand. These are sometimes subtly underhand, with negatively toned questions like “I’ve read reports that this lens is soft, can you recommend an alternative?”, or “Has anyone else had the shutter button stick on this camera?” At other times it’s more blatant.

The reverse happens too. If you post anything genuine criticizing a camera, then be prepared for a revenge attack by that brand’s pet trolls.

Amazon is trying to tackle this issue with its Vine Voice of trusted reviewers, where the reviewer receives a free product and writes about it. The downside of that, as with most customer reviews, is that the opinions of cameras by Vine reviewers are not balanced and reviewers may lack the expertise and experience of using other cameras.

Putting fake reviews aside, the marketplace is not a level playing field. A company that holds a larger percentage of the market will have more fans, and therefore more positive reviews.

They will also have more money to invest in advertising. If there are more adverts for X and fewer for Y, then X will make more sales. Whether you want to believe it about yourself or not, you are heavily influenced by advertising; most people believe adverts don’t affect them; they are wrong. If adverts didn’t work, then they would not exist, let alone be an industry worth $325 billion.

Sales figures also influence buyers: consumers think that half of all cameras are X, so they should buy one of those. Consequently, it becomes a self-fulfilling prophecy. Brand X becomes more popular because it’s popular.

A cool advertisement and lots of sales do not equate to that being the best product for you.

A Camera is for Life, Not Just for Christmas

When you buy your first camera, it is fairly certain that you will end up investing in extra kit that is compatible with it. Make sure you buy the system that is best for you. When you’ve spent a few thousand dollars on lenses, and that camera dies, then you will then probably commit to buying the same brand again, and again.

Although most cameras within price brackets are similar, different camera systems do have advantages and disadvantages. Some brands’ lenses are significantly more expensive than others; other systems risk becoming obsolete as manufacturers abandon DSLRs for mirrorless; some cameras perform better at nighttime; others are better at fast focusing on moving subjects; some are smaller and lighter to transport, making them great for traveling; and a different system may have a better range of lenses. If you envisage shooting outdoors in harsh conditions, then top-end environmental sealing might be important.

Think to the future about what you want to do with your photography and research which system works best for you.

So, How Do You Choose?

Do your research. Think about what you want to photograph, and learn which camera and lens combinations will help you achieve that. Don’t ask in forums which camera you should buy, ask which models of particular brands have the features you need. Read different reviews, but also look at the specifications on manufacturers’ websites. Consider value for money, and how long the camera will last.

Although they are few and far between these days, if you can, go into a real camera shop and check the ergonomics of different cameras. See if they fit your hands and whether they are too heavy to carry all day. Do your fingers easily reach the buttons? Does the camera feel well-made? Is the viewfinder tiny and difficult to see through? Do the focus points reach the edge of the frame?

I’ll repeat once again, they all make great cameras. Whatever you decide won’t be the wrong choice. In fact, pick any camera at random, and in no time, you will be singing its praises and recommending it to everyone else starting out in photography!