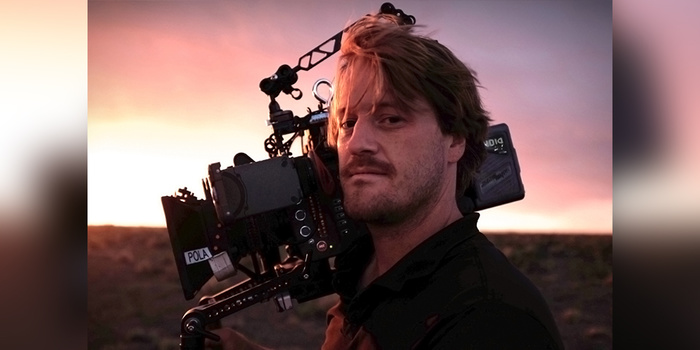 Waldron has made a name for himself by creating painterly photography for documentaries and independent features like “Dear White People.” His latest cinematic challenge was shooting four episodes of Hulu’s “Little Fires Everywhere.” This series is a physiological thriller with a deeper socioeconomic overtone. Waldron’s visualization of the show’s themes helps bring the story to life. 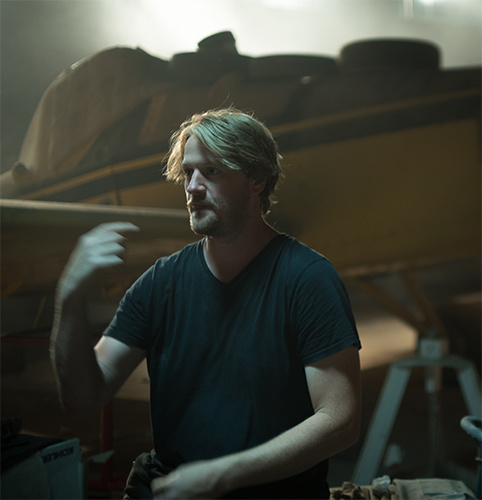 Working on an Episodic

”Little Fires Everywhere” takes place in Shaker Heights, Ohio. But like many episodic shows, it is shot in Los Angeles. Interior shots are all created in a sound stage by a talented art department headed by Jess Kender. The town is not incidental and plays a large role in the story. It can be challenging to create on-location shots that make Los Angeles look Like Shaker Heights, especially during the summer when the show was shot. To get the look of Ohio in the fall and winter, they would diffuse naturally bright sunlight with 800 square feet of silks. At times they would bring in water towers to wet the streets, and they even brought in truckloads of snow to blanket the Los Angeles Streets.

“The hope is that the necessity of shooting in LA doesn’t distract or detract from the experience and that the exteriors and interiors blend seamlessly to create a slice (though a bit abstracted) of Shaker Heights.”

On a high profile show, the crews can seem enormous to some, but just enough to others. Either way, you are managing a lot of people. It can all seem intimidating to someone who is not used to it. Waldron’s approach is to take it shot by shot and day by day. It can be easy to get caught up in the scope of the show. He breaks it down to the shots. They are the same whether you are on a sizable episodic show or an independent film, there is never enough time or money, so you always have to be creative.

You just have to ask yourself: what can I be doing every moment of this prep and shoot to maximize the visual potential of the story we’re telling? If your mind is focused there, the rest is just background noise. 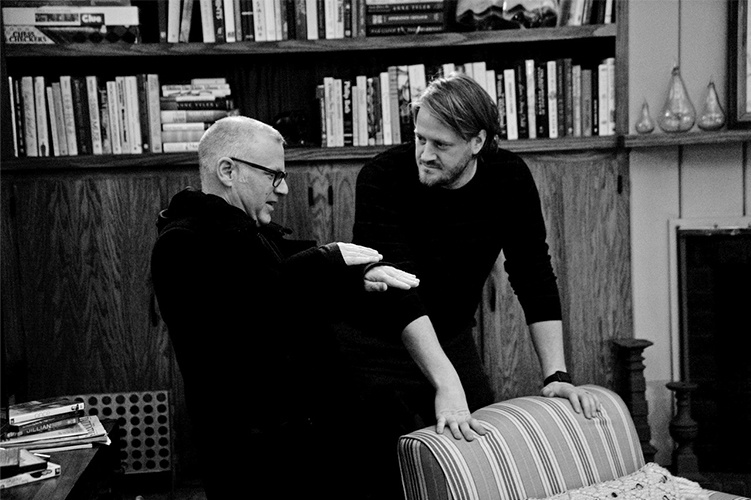 Using Cinematography to Tell a Story

Because the plot of “Little Fires Everywhere” passes through time, Waldron needed to come up with a way to make the audience feel it. The show begins in a large spacious 1990’s style American dream that the character Elena lived in. Waldron established this theme with sizable soft light sources, wide-angle lenses, and normal framing. As the story progressed, and Mia’s world came to life, the cinematography also changed. The lighting became edgier, framing tighter with more chaotic movement, and the colors were bolder. The show starts out light and dreamy but, over time, breaks down into a darker, less formal, more reactive story.

The interplay of these creates immediate tension, and as the danger and paranoia sets in, and the trust starts to erode, you’ll see these chaotic elements invading the peace of Shaker Heights.

While a lot of this look is chaotic, it is created with camera movement and lighting. The show’s DIT, Charles Alexander, had a hand to play in the execution. Waldron and the show’s other DP Trevor Forrest, who shot the first episode of the series, developed an initial LUT for the first few episodes that came from a place of warmth. But over time, the LUT became edgier, with deeper heavier shadows. They also did this by making the highlights starker and more neutral in tone and moved the shadows from a gentle cyan to a truer deep blue. Developing this LUT overtime gave the editorial team a better idea of how the story was progressing through mood and gave the color team a good starting point.

One of the essential parts of being a Director of Photography is having an arsenal of techniques for different situations. For TV, it is often necessary to shoot with two cameras. This is due to budget and time constraints. This means Waldron would have to shoot Cross Coverage, meaning both sides of a conversation were photographed by cameras at the same time. This is not Waldron’s favorite way to shoot, but it is often necessary, so he took it as a creative challenge.

One of his most memorable scenes that used Cross Coverage was a Brief conversation between characters Moody and Izzy. The conversation took place at the edge of a homecoming dance. The pair pulled away from the dance to talk. They were in near silhouettes with a mix of dark cyan and gold tones moving behind them.

There are many problems inherent to Shooting Cross Coverage.

And the most important part is how to make both shots look good.

Solving the camera problems, you lean on a longer lens with a narrower field of view. This allowed him to hold strong eye-lines and shoot past the other camera (they were *right* outside of each other’s frames). Waldron would also work closely with the art department to craft backgrounds for each shot that cut together well. They also created mobile walls of twinkling lights that they could move deep into the background.

To light, the scene Waldron wanted to bring motivated light from the “dance” side of the characters. Walden would first shoot a master shot with both characters visible. After the master shot, he moved to the cross-coverage. He directed the lighting team to place LED softboxes over the head, and then to bring in a large SkyPanel 360 to supplement. The team set a 12×12 magic cloth between all of the lights and the actors. This gave the image a soft cyan push from the dance floor. The 12×12 diffusion is just out of the other side of the frame for each camera and will always require some give and take to split the cameras evenly. Waldron’s team placed a 4×8 sheet of bounce board on the ground *under* each frame for fill light. The gaffer, Danny Durr, and board operator Tim Van Der Linden programmed the dance’s moving light to sweep the headboard with the golden color regularly. The combination of the ambient cyan push and interactive complimentary gold brought a soft representation of the dance floor feeling to the actors’ faces. 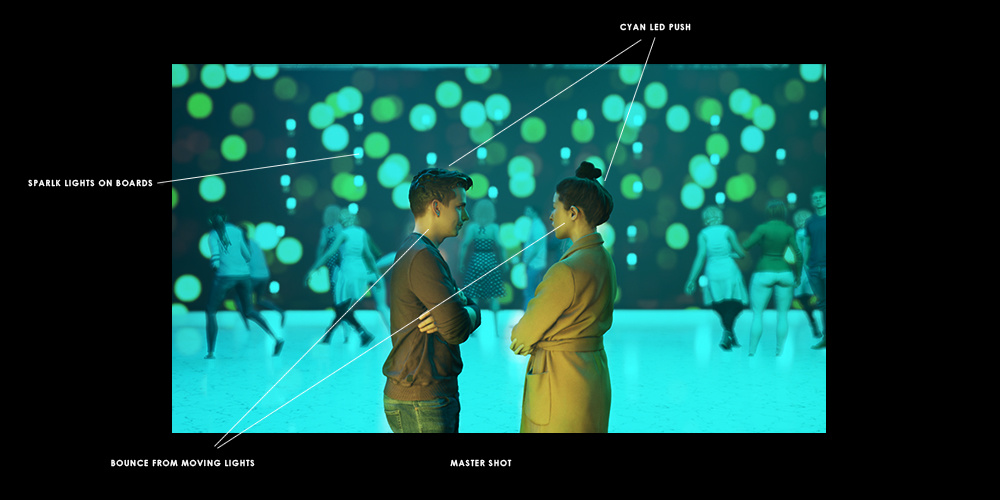 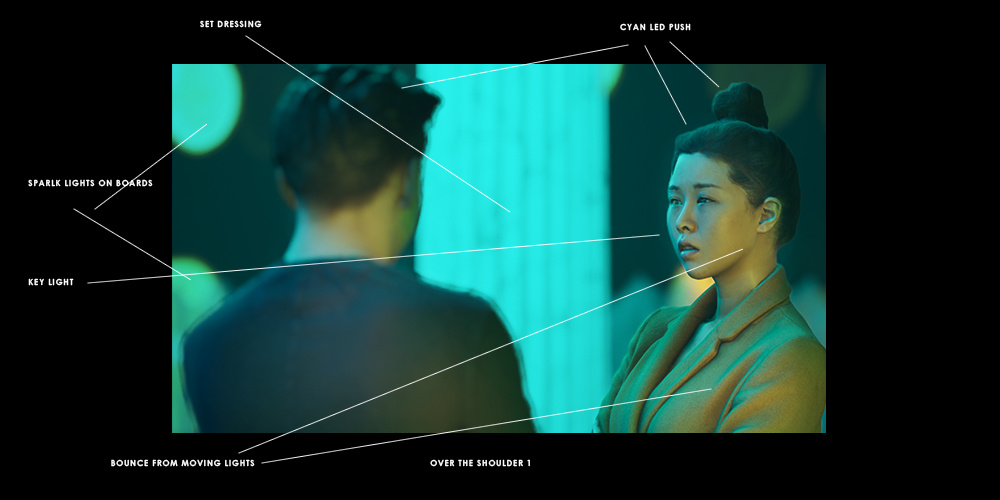 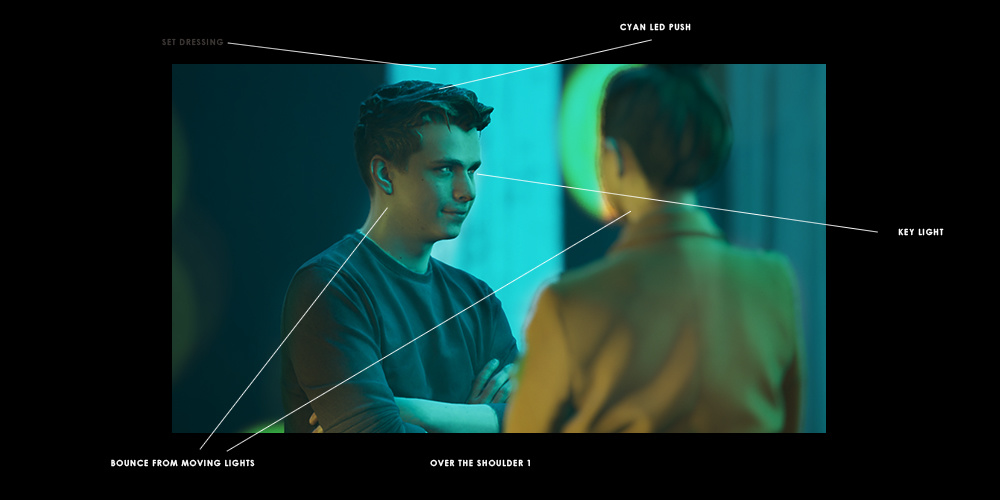 Creative problem solving like tackling cross-coverage and turning Los Angeles into Shaker Heights, Ohio, are just a few of the hurdles a Director of Photography has to overcome on an episodic show. But these are also opportunities to hone personal style and build your body of work. So if you are a new cinematographer, you need to face these challenges head-on like Waldron dose.

To see Waldron’s personal work check out his Vimeo page.