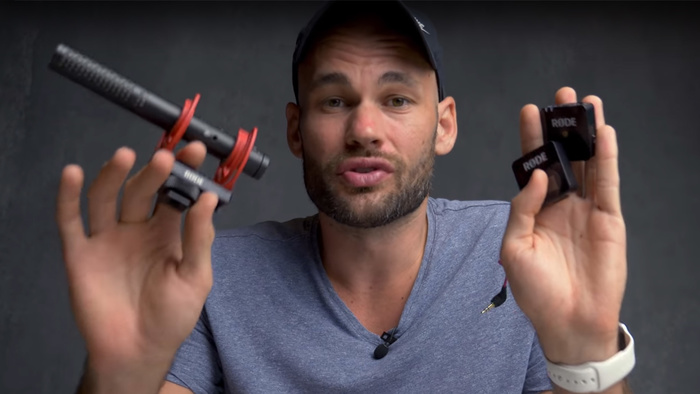 I’ve used a ton of different microphones over the years, but Rode’s latest creations are two of the cheapest and feature-rich mics I’ve ever used.

The Rode Wireless Go lav mic and Rode VideoMic NTG are truly revolutionary products. They have managed to squeeze an amazing amount of tech into incredibly small packages while at the same time adding features. Watch the video above to hear them in action, and I’ll give you a quick rundown of each below.

The Rode Wireless Go system is the smallest and most convenient lav mic system I’ve ever used. Surprisingly, at just $200, it’s also by far the cheapest. The transmitter and receiver both house internal rechargeable batteries that charge via a USB-C port. The transmitter has a microphone built into it so you can clip the entire unit on your shirt or you plug in a wired lav mic and clip the transmitter somewhere else on your subject like a standard system. Unlike Rode’s previous lav system, we have not ever had an issue with interference hardware failure.

The built-in microphone does not sound as good as our $1,000 Sennheiser G4 and MKE2 lav mic, but you wouldn’t expect it to. But for the price, sound quality is great, and it’s much easier to use than any other system I’ve tested.

The Rode VideoMic NTG is like three microphones in one. It comes with a hotshoe mount in the box so that you can use it as an external microphone for your camera. For better audio, you can boom the microphone above your subject and simply run a long 1/8″ headphone jack into your camera or an external recorder. The VideoMic NTG also has a USB-C port that you can use to charge it up, but this port can also be used to output a digital signal. This makes the VideoMic NTG a great choice for Skype calls, screen recording, and podcasting. Because it has both a USB-C and headphone output, you can export digital and analog signals from the mic at the exact same time. This is an incredibly rare feature that allows you to output audio to two sources or monitor your audio via headphones while you record your audio digital from the USB-C port.

The gain knob on the back of the mic makes setting your levels easy no matter how you use the mic, and extra features like high-pass filters, high enhancer, -20 dB pad, and safety channel make this mic even better. I fully expected this mic to cost over $600, but it only costs $250.

If you’re looking exclusively for audio quality, these mics certainly aren’t the best on the market, but in terms of features, ease of use, and price point, these mics absolutely destroy the competition.