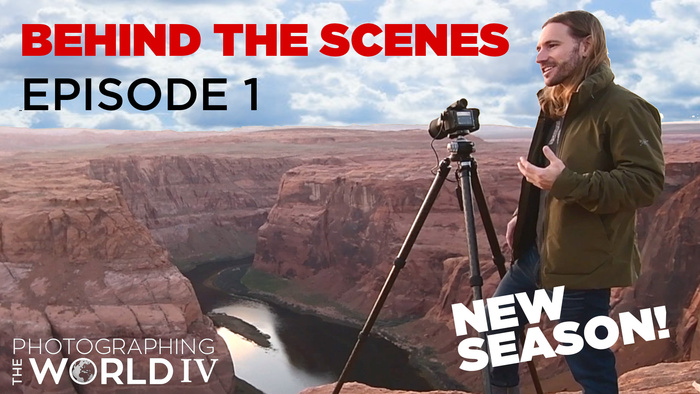 We’ve been working on “Photographing The World 4 with Elia Locardi“ for a year and a half, and it’s finally complete. I’m excited to say that the tutorial is now available, and the first episode of the behind the scenes series is live as well.

Right before the launch of the Fuji GFX 50S, Fuji hired Elia to take pictures around the US with the new medium format camera. They then hired Patrick and me to film a commercial about the camera with Elia. We decided to knock out two birds with one stone and begin filming PTW 4 while at the same time grabbing clips for Fuji’s commercial. You can check out our finished Fuji Ad below.

Episode 1 of this behind the scenes series begins with us flying to Las Vegas and then driving out to Page, Arizona to photograph Horseshoe Bend. I’ve seen pictures of Horseshoe Bend my whole life, and it was incredible to see it in person. My first impression of the location wasn’t great; it was another gigantic parking lot with thousands of people all walking to see the exact same thing. Luckily Horseshoe Bend is so large that it didn’t feel as crowded as it probably looks in our video.

Today I was sent an interesting video about Horseshoe Bend and other newly popular destinations. Apparently, it won’t look the way it does in this video for very long.

Our biggest issue with filming this lesson was trying to work around all of the selfie shooters. This is a public location, and we didn’t want to ask anyone to move, so instead, we just waited for them to take a photograph and leave. Until this moment, I didn’t realize how many pictures selfie shooters take. I’m not exaggerating when I say that most of these guys and girls were taking 50-100 pictures of the exact same thing over and over again. Watching selfie shooters eventually became more intriguing than the incredible view of the river.

For the first lesson of this tutorial, Elia created a pretty complex shot by using a shift lens to create a shift-stitch pano with star trails. Being that this was the fourth iteration of Photographing The World, he assumed the viewer would be up for a challenge. Luckily, the sky was clear throughout the entire shoot, and the photograph turned out exactly as we expected.

In total, there are 10 episodes in this behind the scenes series that we will be posting weekly. Stay tuned for the next episode or buy the full tutorial and get them included with the purchase.