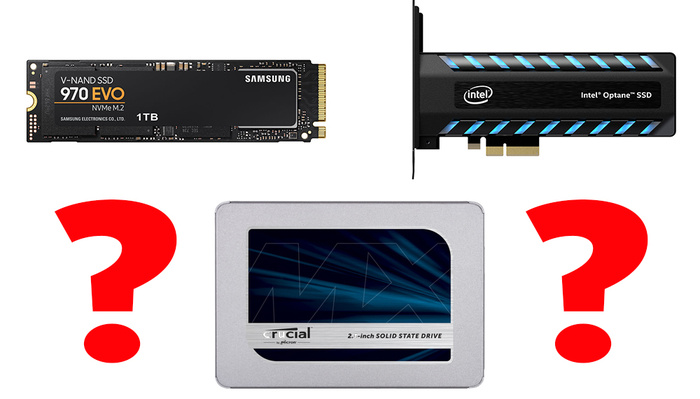 What are the differences between a traditional SSD and a NVMe drive? Should I upgrade to NVMe? Which model should I pick? What are the main specifications? What about the new Intel Optane? Here is a detailed explanation to understand the advantages, weaknesses, and differences of these storage technologies.

A modern computer must have at least one SSD to run the main operating system (e.g. Windows 10, macOS). The speed and latency gain of the SSDs over traditional spinning hard drives is enormous. If possible, buy another SSD to dump the “hot” files that are being used on live editing projects. However, the current SATA interface is now reaching its limit (550MB/s) and the next generation of SSD based on the NVMe interface and PCIe bus is going to replace SATA in the future. That’s the main difference: an NVMe drive is just an SSD with a different shape (M.2), bus (PCIe), and interface (NVMe) while the regular SSD is just a SATA SSD with an “old” interface (SATA) and shape (2.5”). So instead of saying SSD versus NVMe, we should say SATA SSD and NVMe SSD. Here is an explanation about this standard:

Performance and price: Thanks to the new interface and PCIe bus, the NVMe SSD drives are up to six times faster than the typical SATA SSD. The latency and queuing operations are also vastly improved. However, these new SSDs are about 50 to 100% more expensive than the classic 2.5” SATA SSD.

NVMe interface: When the SSD became affordable for the consumer market around 2010, they inherited from the old SATA/AHCI interface initially designed for the traditional spinning hard drive architecture. At the time, this interface allowed an easy transition thanks to its compatibility with the SATA SSD but it also created a data bottleneck because of its limited bandwidth (550MB/s). To overcome the SATA limit, manufacturers created a new standard called NVMe in 2009 that progressively replaced the ACHI interface on the PCIe SSD. In real life, the NVMe technology offers great speed gain by reducing the latency and increasing the bandwidth.

PCIe bus: In order to handle the greater speed offered by the NVMe interface, the SSD must use the PCIe bus. NVMe drive are actually PCIe SSD. Therefore, some can be mounted directly on the PCIe slot like a graphic card but in general, the NVME SSD are attached via the M.2 connector because of the limited amount of PCIe slots (and the graphic card already uses the fastest line directly connected to the CPU).

M.2 form factor and connector: The classic SATA SSD uses the 2.5” form factor because it was the standard size for laptops hard drives. However, the 2.5” format is oversized for SSDs and they should be much smaller. The new NVMe SSD are getting rid of the 2.5” constraint to adopt the M.2 form factor also borrowed from the laptop industry. The M.2 NVMe SSD are not bigger than a gum stick. The number next to the NVMe SSD indicates the width and length of the drive in millimeters. For instance, 2280 SSD means 22mm (width) by 80mm (length). Many motherboards accept several sizes but the standard for desktop computers is becoming the 2280. But be careful: all M.2 shaped drives are not necessarily NVMe ready and the early M.2 versions were just using the old SATA interface. Finally, several types of socket are present on the M.2 drives (B key, M key and B+M key). However, the majority of the NVMe drives use the fastest M Key socket running at full speed over four PCIe lanes (versus two lanes for the B Key and B+M key).

Do You Really Need an NMVe SSD?

As we just saw, the classic 2.5” SATA SSD are limited by the SATA interface to 550 MB/s. On the other end, the best NVMe SSDs are currently reaching up to 3,500 MB/s (read) and 2,100 MB/s (write) speed, and they offer much better latency. They also cost twice as much compared to the SATA SSD. As always, the final answer depends on your budget and usage. In any case, NVMe SSD will seriously speed up your applications’ boot time and task-responsiveness, especially when working with large files. High-bandwidth materials like panoramic stitching and raw video will benefit from the additional bandwidth for preview and scrubbing. However, export performance won’t be as dramatic because the drive is rarely the limiting factor in this phase. Rendering is usually not limited by the drive but by the processing power of the CPU and GPU. Feeding more data to these processors won’t help when they already run at full capacity.

Eventually, a reasonable price/performance solution is to install an NVMe SSD for the operating system and add a cheaper SATA SSD to store the hot files like the images and video used on current editing projects. To give you an idea, most 12 bits intermediate Codec and even some lossy raw footage up to 4K resolution don’t saturate the SATA SSD bandwidth (Canon Cinema Raw Light is 1 Gbps, ProRes 4444XQ is 2.1 Gbps, Redcode 6:1 is 500 Mbps).

Another reason to wait before transitioning to the NVMe drive is the heating issue. Due to the architecture of desktop computer, NVMe drives are connected in PCIe next to the graphic card, one of the hottest part of the machine whereas SATA SSDs can be mounted away from the core of the computer thanks to the long SATA cable. Under heavy load and thermal stress, the performance of the NVMe drive can drop dramatically. If possible try to mount the NVMe as far as possible of the graphic card in a well-ventilated area (e.g. not directly above the GPU or next to the exhaust fan) and add a small fan to push cool air on the NVMe SSD. Verify the design of a desired motherboard before checking out in order to avoid an unpleasant surprise.

What About the Intel Optane?

The Intel Optane drive is also based on the NVMe interface and PCIe bus but uses the new 3D XPoint flash memory developed by Intel for ultimate performance.

This technology just hit the market last year and the latency speed is superlative but Optane drives are extremely expensive and only available in limited size (960GB at $1,300). For regular photo-video usage, the benefits of the Optane over the NVMe doesn’t justify the massive price difference (up to 4 to 6 times pricier). In addition, Intel proposes small Optane M.2 modules that can be used as cache memory to boost the performances of traditional hard drives. Except for large file transfer, the results are actually surprisingly good.

Conclusion: Can You Justify the Price Difference?

For common photo-video usage, classic SATA SSDs are more than enough to fulfill our needs as the actual SATA bandwith (550MB/s) and latency are still capable of handling most tasks reasonably well. If budget permits, a NVMe drive can be justified as the main computer drive to run the operating system and software. However, do you really need to spend twice the money for a NVMe SSD when this cash could be spent on a better CPU or GPU? The price difference between a 1TB SATA SSD ($164) and NVMe SSD ($300) is $136. This money represents the gap between a 6 cores and 8 cores processor. Sure, a NVMe drive will speed up the boot time and file transfer but these operations are not necessarily critical. Should you save 50% of 20 seconds boot time or 10% of 30 minutes rendering?

As for the Optane drives, they are simply too expensive at the moment and the performance gain over a good NVMe drive is not correlated with the 400% price difference.